The Okaloosa County Sheriff’s Office is looking for a person of interest in connection with an early morning shooting death of an Uber driver on Okaloosa Island 06/24/2018.

29-year old Filip L. Kirilov, believed to be a Destin resident, suffered a gunshot wound and was found dead inside his blue van at 656 Santa Rosa Boulevard around 6:30 a.m. Sunday.

OCSO Investigators say the motive for the shooting is unclear at this point. They believe he was shot sometime between 4 a.m. and 6 a.m.

Anyone with information on the shooting or who spotted anything suspicious in the area of Santa Rosa Boulevard and Nautilus Court around that timeframe is asked to please contact the OCSO at 850-651-7400 or Emerald Coast Crime Stoppers at 850-863-TIPS, emeraldcoastcrimestoppers.com, or by using the P3 Tips Mobile application. 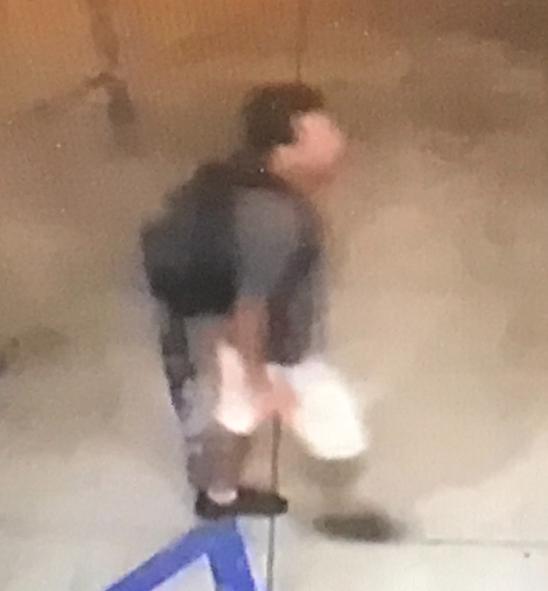 STATUS: SOLVED
05/15/2018 UPDATE - SUSPECT IDENTIFIED AND ARRESTED!
The OCSO is investigating an Armed Robbery at 757 N Beal Pkwy near Fort Walton Beach that took place around 1 a.m. on April 29th. The suspect is a white male who was wearing dark clothing and armed with a two-tone pistol. He took cash & Marlboro Red cigarettes. Anyone with information please call 1-850-651-7400 or contact Emerald Coast Crime Stoppers at 1-850-863-TIPS, www.emeraldcoastcrimestoppers.com or by using the P3 Tips mobile application. If your tip leads to an arrest, you could be eligible for a cash reward of UP TO $3,000! 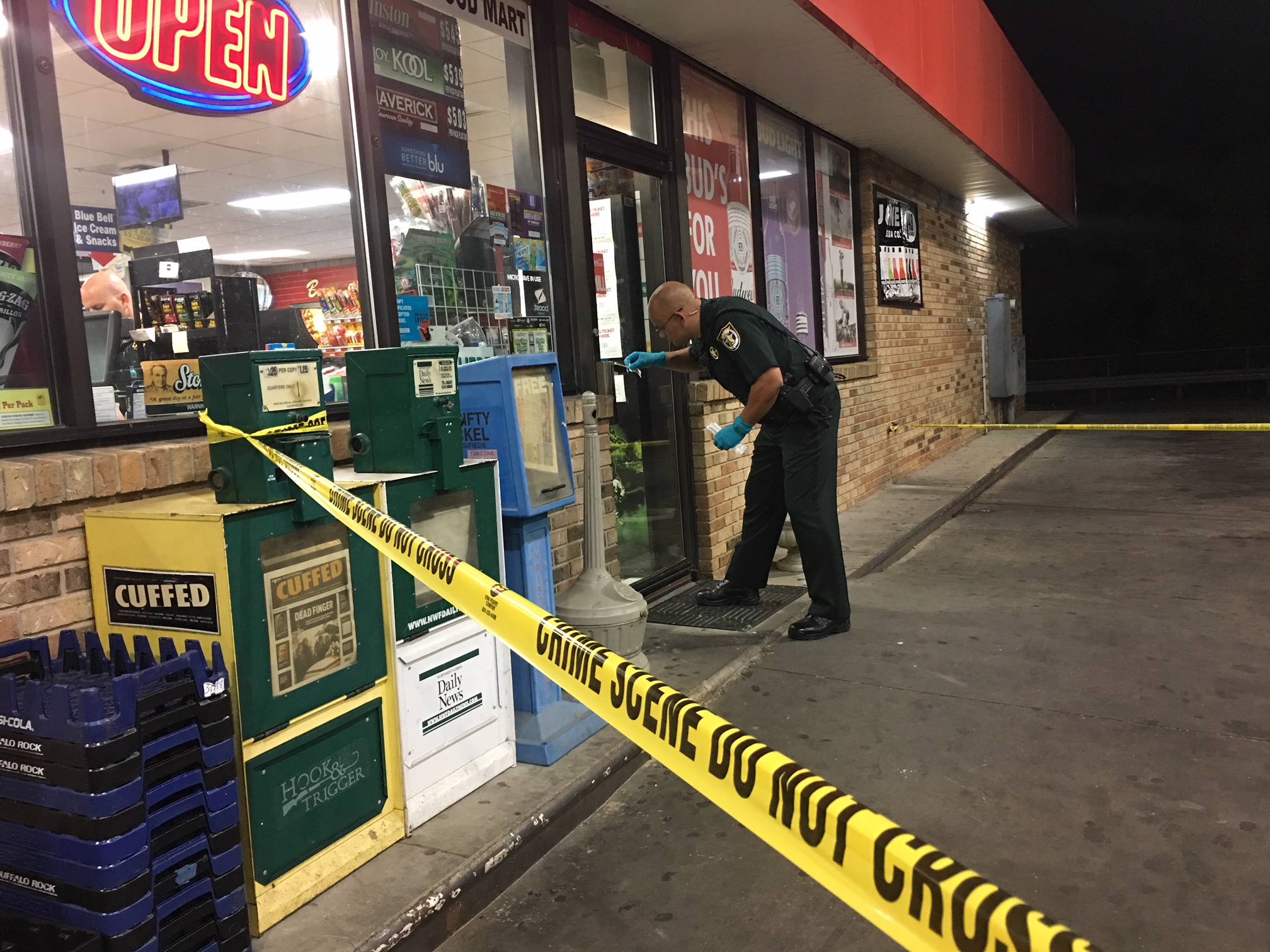 The Crestview Police Department is seeking leads after two nearby Crestview charity-run stores were burglarized a day apart from each other.

On the morning of Jan. 19, officers responded to a call of a reported burglary at the Exodos Ministries thrift store at 696 Ferdon Blvd. North that had apparently occurred the previous night.

A door between the storage area and the retail area had also been forced open, employees discovered, and more than $200 in cash was missing.

Investigators are coordinating with Moulton’s Pharmacy, located next door to the shop, to obtain security video of the parking lot between the businesses.

That night burglars struck the Goodwill store a block up the street from Exodos Ministries’ shop, apparently climbing into a fenced-in storage area behind the 793 Ferdon Blvd. North business and forcing the gate open from the inside.

The burglars made off with 15 donated bicycles with an estimated value of $300, a store manager reported.

Anyone with information can contact Emerald Coast Crime Stoppers anonymously at (850) 863-TIPS, at www.emeraldcoastcrimestoppers.com or submit a tip via the P3 Mobile App.

The Crestview Police Department is requesting any information relating to the identification of the above pictured black male who robbed the Cash’s Liquor Store (Next to the Crest Lounge), located at 1675 Ferdon-S Blvd., Crestview, FL, at gunpoint on 16 January 2018 at approximately 8:03PM.

The above pictured black male is approximately 5’10”-6’0” in height with a medium build. The suspect appears to have a prominent brow ridge and walks with his feet pointed outwards as he steps.

Anyone with information about this robbery can contact Emerald Coast Crime Stoppers anonymously at (850) 863-TIPS, at www.emeraldcoastcrimestoppers.com or submit a tip via the P3 Mobile App. 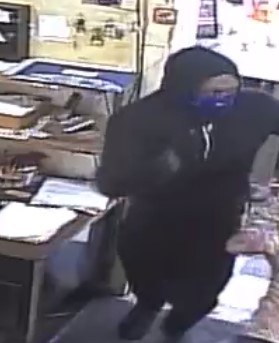 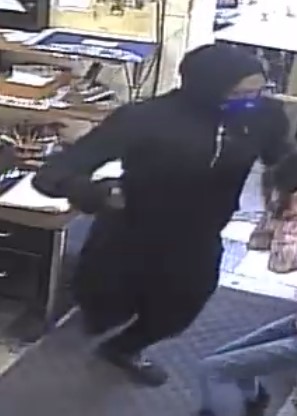 On 12/13/2017 at approximately 8:13PM hours, these two individuals paid for goods/gift cards at Publix (251 Miracle Strip Pkwy SE) with fictitious checks. The individuals have since returned, and attempted to pass the same fictitious checks at Publix on 1/15/2018. When the cashier refused to cash the checks, both individuals got into a newer black or dark blue Mazda hatchback. They are using fake Georgia and Alabama ID cards. Anyone with information can contact Emerald Coast Crime Stoppers anonymously at (850) 863-TIPS, at www.emeraldcoastcrimestoppers.com or submit a tip via the P3 Mobile App. 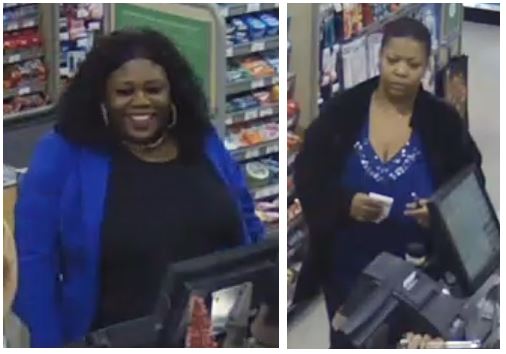 A Destin Subway restaurant was robbed Saturday night by an armed woman the victim described as "smelly" and wearing a brown wig.

The robber came into the Subway at 1253 Airport Road around 10 p.m. several times and on the third entry, she demanded money and opened her purse and placed it on the counter. The employee could see a large semi-automatic pistol inside the purse that the robber was holding in her right hand.

The woman left after getting a small amount of cash.

The victim describes the white female armed robber as around 45 years of age, approximately 5’5" tall and 170 pounds, with a thin face and thin lips. She says the woman was "smelly" and was wearing a dark brown jacket, dark pants, a brown wig, and prescription glasses.

Anyone with information is asked to call the Okaloosa County Sheriff’s Office at 850-651-7400 or Emerald Coast Crime Stoppers at 850-863-TIPS, emeraldcoastcrimestoppers.com, or by using the P3 Tips Mobile application.

The Crestview Police Department is seeking information about an early morning shooting that left one man critically injured. Police responded to the Crape Myrtle Apartmerns at the corner of Lloyd Street South and Martin Luther King Jr. Avenue around 1:20 AM on 10/04/2017 and discovered a 22-year old man with a gunshot wound to the head.
Anyone with any information reference this shooting can contact Investigator Temple (Crestview Police Department) at 850-682-2055 or Emerald Coast Crime Stoppers anonymously at (850) 863-TIPS, at www.emeraldcoastcrimestoppers.com or submit a tip via the P3 Mobile app. 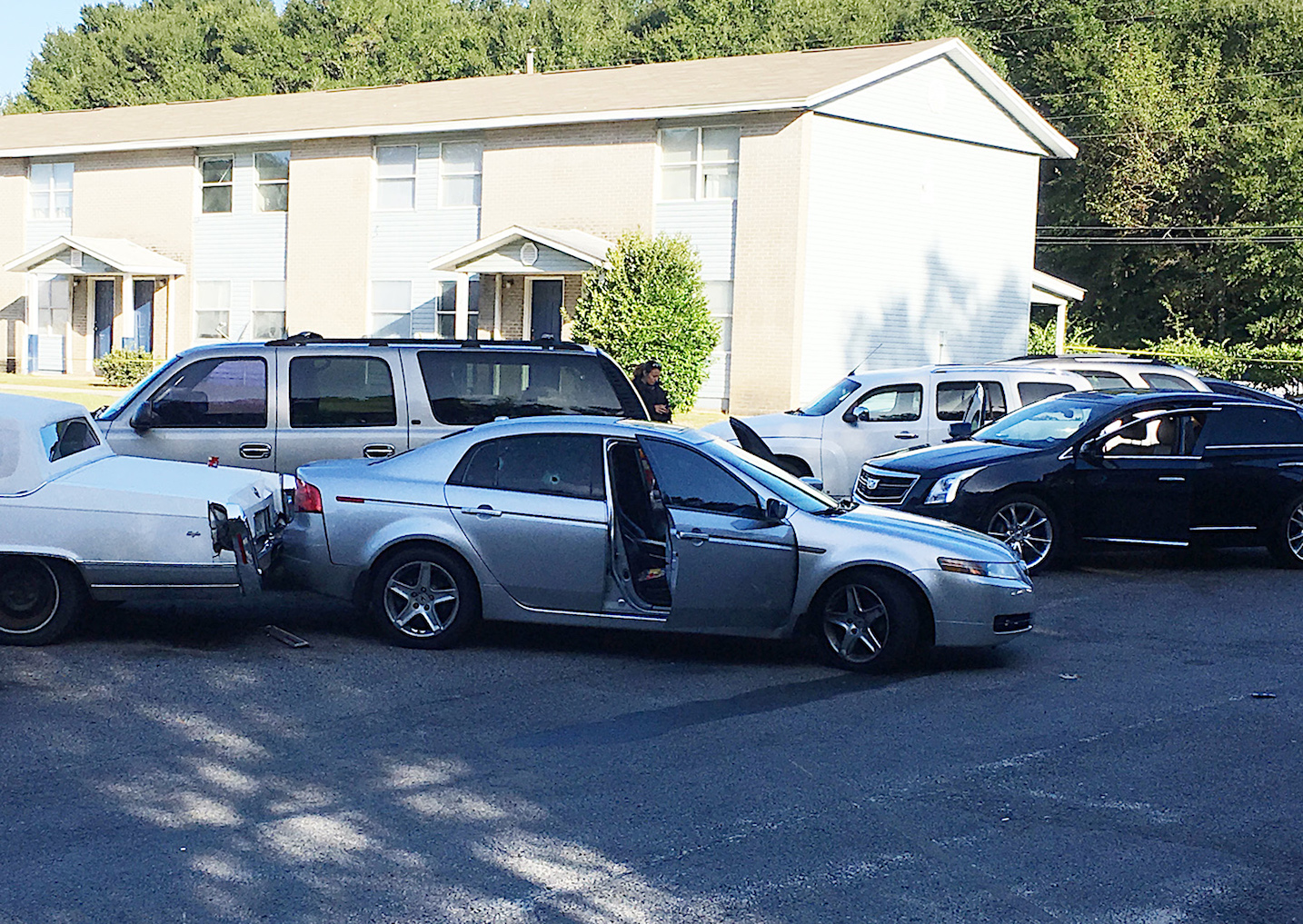 The Okaloosa County Sheriff's Office responded to multiple vehicle burglaries in the Regatta Bay neighborhood in Destin on 08/24/2017. Deputies are asking for assistance identifying the four individuals in the clip below who were seen on video in the area around the time of the burglaries. Anyone with information can contact Emerald Coast Crime Stoppers anonymously at (850) 863-TIPS, at www.emeraldcoastcrimestoppers.com or submit a tip via the P3 Mobile App.

Okaloosa County Sheriff’s Office Deputies are looking for the public’s assistance in their efforts to identify a man who battered a woman in the parking lot of Santa Rosa Mall during an attempted carjacking April 7th.

Deputies were called to the mall around 10:30 a.m. and made contact with the 44 year old woman and her mother. The victims say they arrived at the mall and parked at the Food Court entrance. When the daughter, who was a passenger in the front seat, opened her door she says a white male in his forties rushed over with his hand up his shirt as if holding a weapon. He had navy colored underwear on his head. He stated three times to "get in the car." The woman refused and pushed him away. She says he then grabbed her and pulled her out. He got into the car and started yelling at the woman’s 82-year old mother, who was still in the driver’s seat. The daughter immediately ripped at the suspect’s clothes, neck, and arms to get him away from her mom. She says she pulled him out of the car and began hitting him, yelling to attract attention. The man ran from the scene towards Ruby Circle.

On May 23rd, OCSO investigators worked with the victim to create a sketch of the suspect. The Okaloosa County Sheriff’s Office is now seeking the public`s assistance in attempts to identify the individual. The victim also stated the suspect, who is about 5’9" tall, lost his shirt during the struggle and she noticed multiple freckles or liver spots on his arms and back, as well as the back of his head, but not on his face. She believes the male is of Irish descent.

If you have any information about the identity of the person in the sketch please contact Investigator Steve Weyer Okaloosa County Sheriff’s Office at 850-609-2021 or Emerald Coast Crime Stoppers at 850-863-TIPS, EmeraldCoastCrimeStoppers.com, or by using the P3 Mobile Tips application. 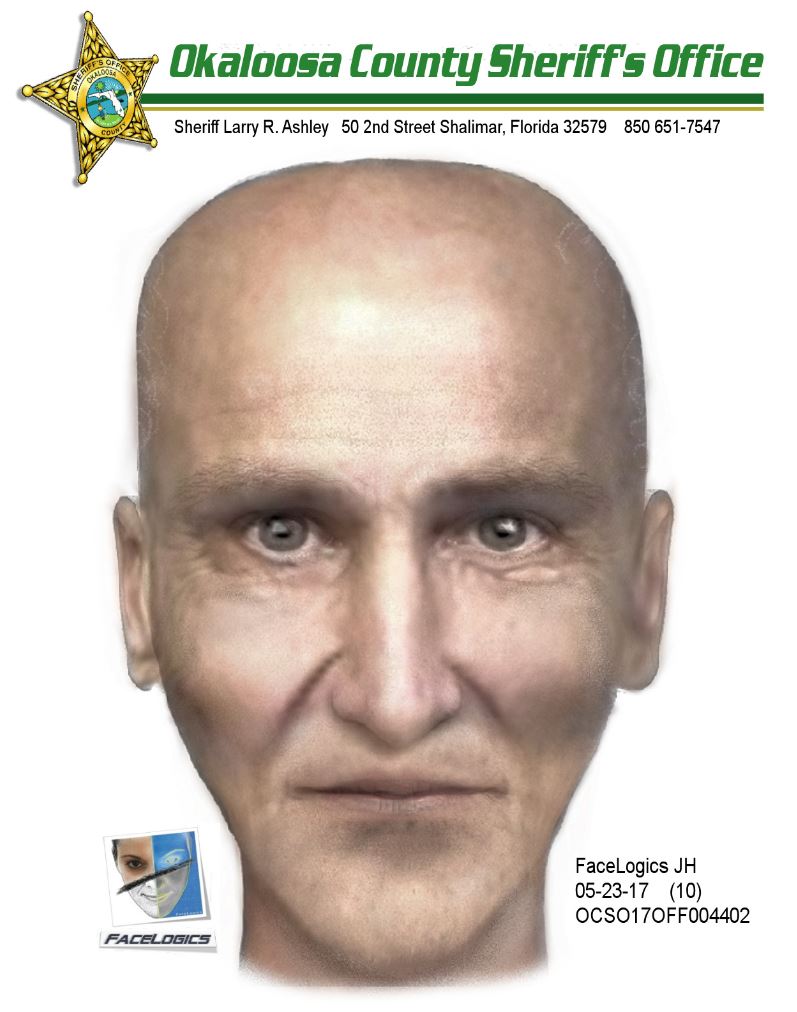 A man brandishing a gun held up the Waffle House at 460 Racetrack Road near Fort Walton Beach just before 5 a.m. on 01/31/2017 before running out the door and heading north.

The clerk says the man, wearing sunglasses and dressed all in black with a white shirt tied around this face, appeared to be a white male. She says he was about 5?6? tall with a stocky build.

Deputies with the Okaloosa County Sheriff’s Office and a K9 Unit responded and an active investigation is underway.

Anyone with information is asked to contact the OCSO at 850-651-7400 or Emerald Coast Crime Stoppers at 850-863-TIPS, emeraldcoastcrimestoppers.com, or by using the P3 Tips Mobile application. 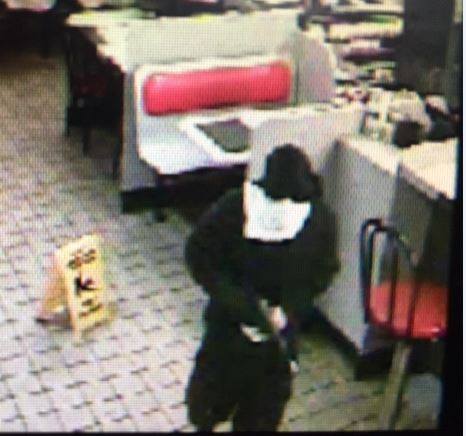