The Okaloosa County Sheriff’s Office is working to determine who is responsible for the fatal shooting of a
Fort Walton Beach teen Monday night.
Deputies were called to the area of Earl Street and Poplar Avenue around 11:30 in response to reports of
gunfire.
Callers reported hearing multiple shots.
A responding deputy spotted a car using its emergency flashers leaving the area and made a traffic stop.
The teen’s parents were attempting to drive the unconscious victim to the hospital. Deputies immediately
began to render lifesaving measures until EMS arrived. The victim, who had suffered a gunshot wound to the
chest, was transported to Fort Walton Beach Medical Center where he was pronounced dead shortly before
midnight. He’s identified as 15-year old Quolee Jackson of Earl Street.
OCSO deputies and investigators, with assistance from the Fort Walton Beach Police Department, canvassed
the area for evidence and witnesses overnight and are continuing their work at this hour.
Sheriff Eric Aden says this tragic incident is a time for our community to focus on compassion, commitment,
and community.
“These parents are having to endure unspeakable loss and pain due to this senseless violence. As a
community, we must work together to determine who is responsible and bring them to justice. We are
committed to that mission and ask that anyone who has any information that could assist our investigation to
please share it immediately."
Quolee's parents join in that plea for information with his mother saying, " He was a loving and caring boy".
You can contact the OCSO directly at 651-7400 but also remember that you can also stay anonymous and use
Emerald Coast Crime Stoppers.You do not have to give your name and if your information helps lead to an
arrest, you can earn a cash reward of up to $3000 by simply doing the right thing.
Sheriff Aden added, "Our investigators are working relentlessly. Meantime, if you know something, please
say something. Again that’s 651-7400 for the OCSO or for Emerald Coast Crime Stoppers – it’s 850.863.TIPS,
emeraldcoastcrimestoppers.com, or the P3 Tips Mobile application. “

The Okaloosa County Sheriff’s Office is investigating a fatal shooting that took place on Vincent Lane yesterday evening and asking the public for any information in reference to photos of a suspect in the homicide.
The victim has been identified as 48-year old Earnest Riggs Jr. of the Fort Walton Beach area.
Multiple 9-1-1 calls were received around 7 p.m. Thursday from residents in the neighborhood reporting the sounds of gunfire and/or that a man had been shot.
Responding Okaloosa County Sheriff’s Office deputies found the victim inside a Chevrolet rental work truck parked in the street. Two workers who had been in the truck during the shooting stayed on scene, while two others had fled.
Investigators say residents told them the man in black pictured above had been walking around in the area for an hour or more before the shooting took place. The victim had reportedly been in that location because someone was inquiring about a bid on concrete work.
Anyone with information on the person shown above or the shooting is asked to contact the Okaloosa County Sheriff’s Office at 850.641.7400 or Emerald Coast Crime Stoppers at 850.863.TIPS, Emeraldcoastcrimestoppers.com, or through the P3 Tips Mobile application. 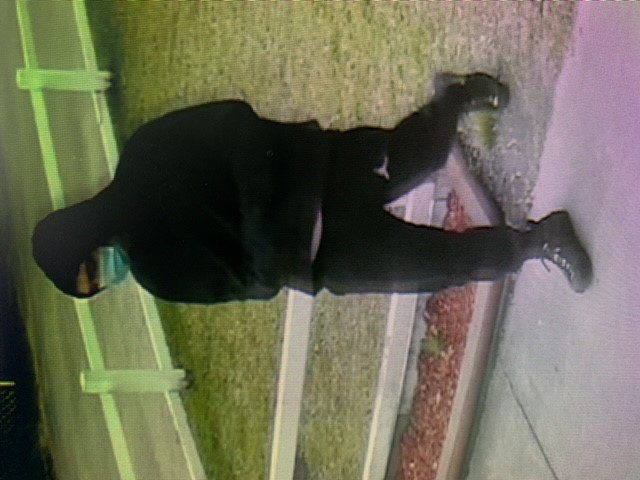 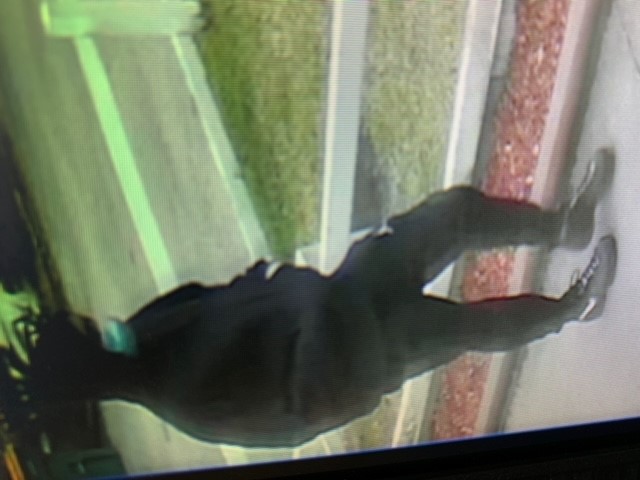 On February 7, 2021, between the hours of 6:00 pm and 2:00 am, the individuals pictured below arrived in three vehicles and parked on the corner of Lauren Ct. and Indian Trail in Destin. They proceeded to enter and steal two vehicles while burglarizing another. These crimes occurred in the area of Lauren Ct and Mesa Rd in Destin. One of the suspects is described as a light-skinned black male wearing a hoodie and mask. Suspects 2 & 3 are also seen in security footage, however there are no clear pictures of either of them. Anyone with information can contact Emerald Coast Crime Stoppers anonymously at (850) 863-TIPS, at www.emeraldcoastcrimestoppers.com or submit a tip via the P3 Tips Mobile App. 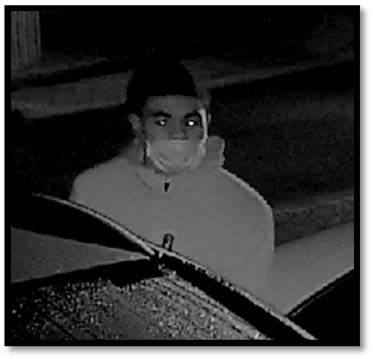 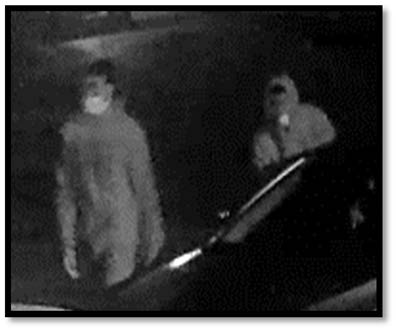 A DeFuniak Springs shooting left one injured after more than a dozen shots were fired late Sunday evening.

The first 9-1-1 call came in at 8:07 pm when a caller reported hearing the sound of gunfire in the area of Fairfield Drive and U.S. Highway 90. When deputies arrived, they located a vehicle with bullet holes and a victim inside.

The patient was quickly transported by helicopter to Fort Walton Beach Medical Center. The victim’s wounds are severe, but not life-threatening.

A witness at the scene reported the suspect vehicle sped off after firing more than 14 rounds at the car and headed east toward DeFuniak Springs. The witness stated the cars were headed west at the time of the shooting.  After the suspect vehicle stopped next to the victim’s car it went down and turned around firing shots as it headed back East on 90.

The witness was unable to determine the make and model of the shooter’s vehicle.

Emerald Coast Crime Stoppers is offering up to a $3,000 reward for information leading to an arrest. The Florida Sheriff's Association Criminal Apprehension Assistance Program has chipped in another $5,000 towards the reward.

Anyone with information regarding this incident or anyone traveling in the area of Highway 90 and Fairfield Drive on the night of Sunday, January the 10th who remembers seeing a dark 4-door sedan is asked to call us at (850)-892-8111 or you can remain anonymous by calling Emerald Coast Crime Stoppers 850-863-TIPS (8477). You could be eligible for a cash reward if your tip leads to an arrest. 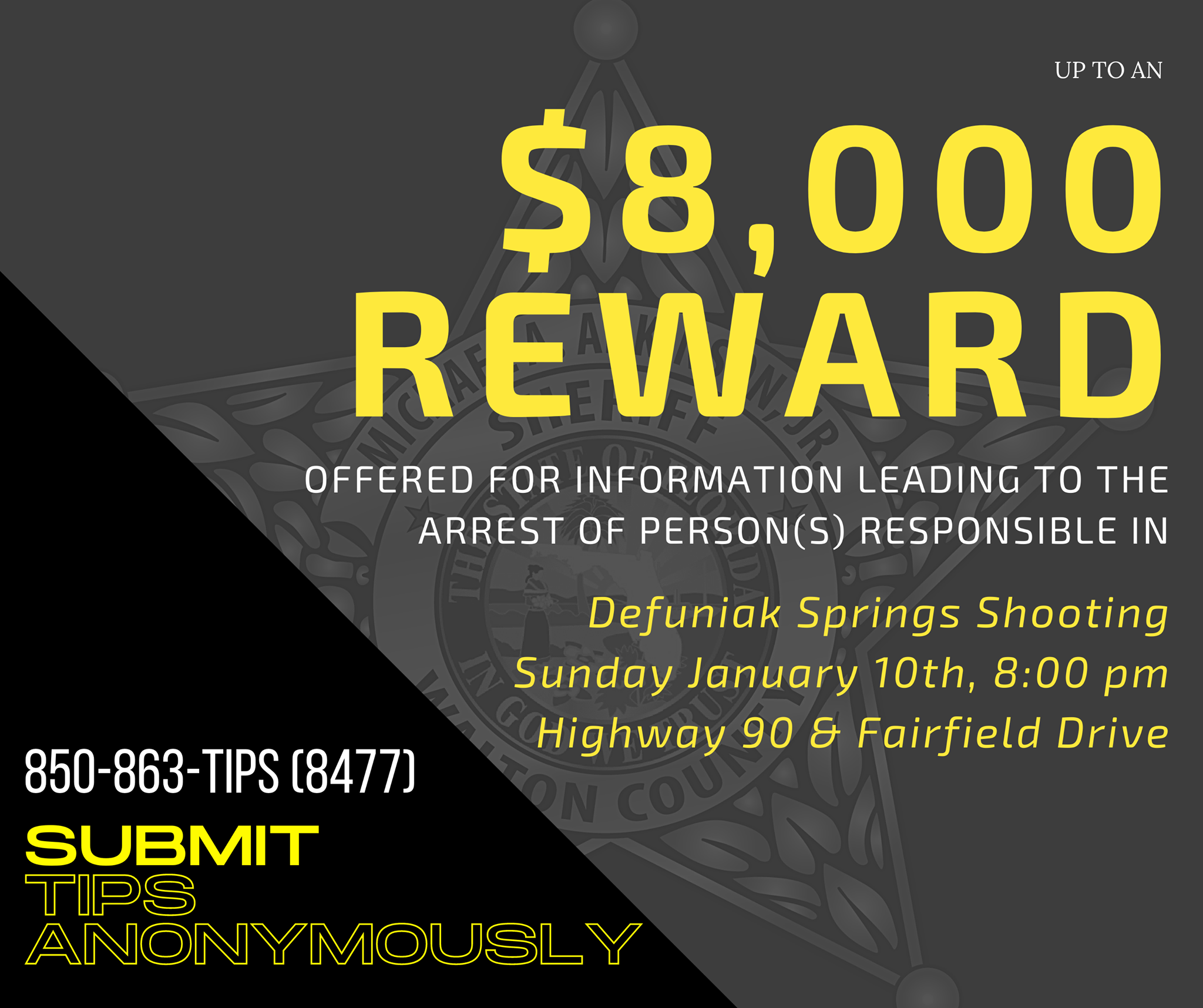 The Okaloosa County Sheriff’s Office is investigating the apparent shooting death of a Crestview man at a home in southwest Okaloosa County.
The OCSO received a 9-1-1 call 11/20/2020 around 1:44 p.m. from a screaming woman at a home at 107 Marimba Street in Florosa.
When deputies arrived at the trailer they found 35-year old DeShaun Frazier inside in a pool of blood.
Anyone who may have witnessed any unusual activity in that area of Florosa during that timeframe, or who has any information about the case, is asked to contact the OCSO at 850.651.7400 or Emerald Coast Crime Stoppers at 850.863.TIPS, emeraldcoastcrimestoppers.com, or by using the P3 Tips Mobile application. 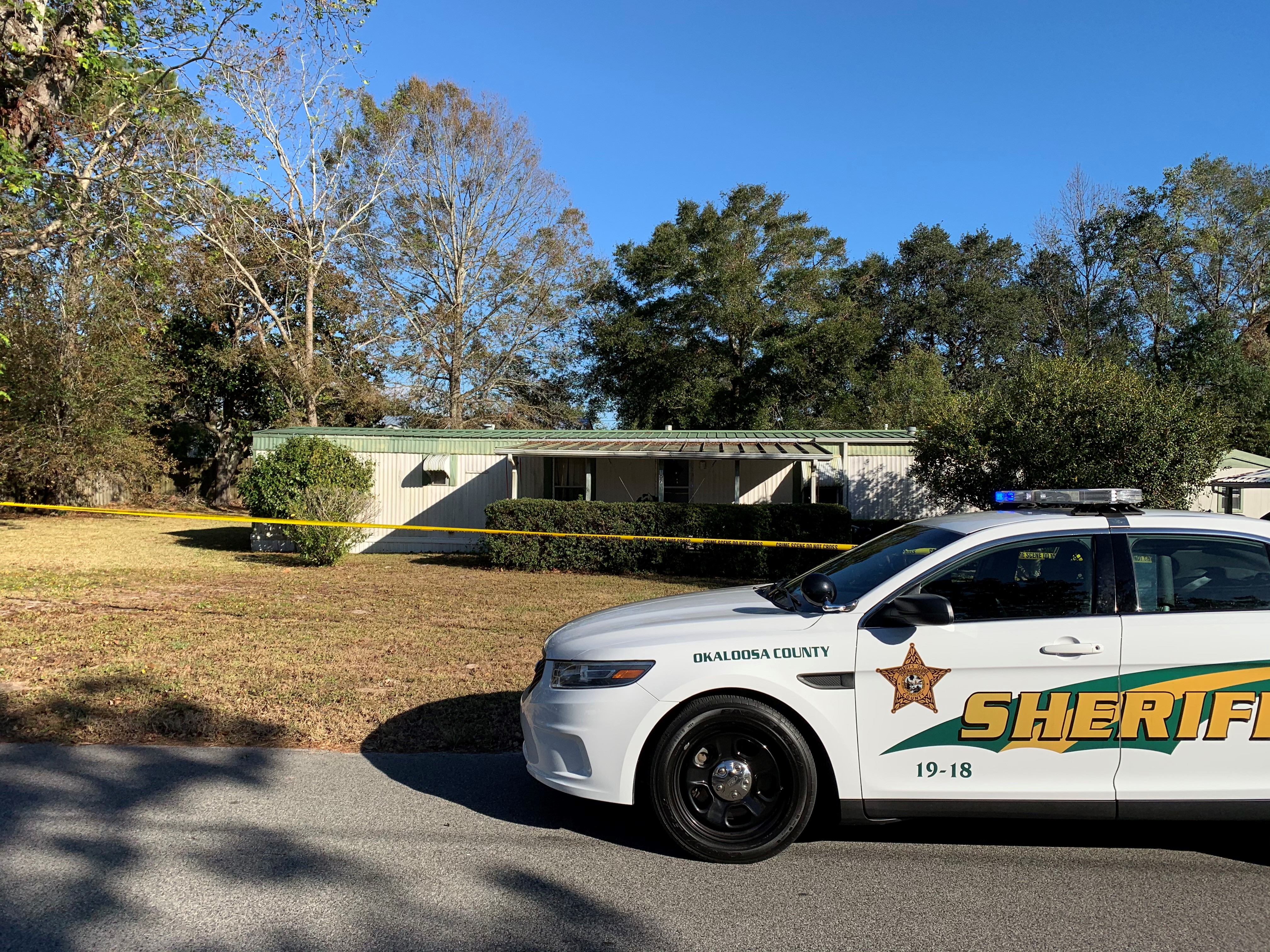 The Fort Walton Beach Police Department is trying to identify two females that stole more than $1,800 worth of merchandise from Ulta in Uptown Station on 07/28/2020. The first suspect is described as a Hispanic female, approximately 5’4”, wearing a black dress, black sandals and a carrying a large black purse. She has long black hair which faded to a dark blondish color and had tattoos on both arms.
The second suspect is described as a white female, approximately 5’4”, wearing a white floral dress, brown sandals and a carrying a large black purse. She had dark hair, possibly dark burgundy. There is a large tattoo located on her right shoulder blade. Anyone with information can contact Emerald Coast Crime Stoppers anonymously at (850) 863-TIPS, at www.emeraldcoastcrimestoppers.com or submit a tip via the P3 Tips Mobile App. 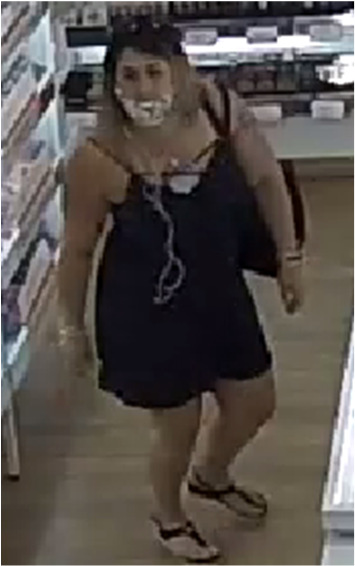 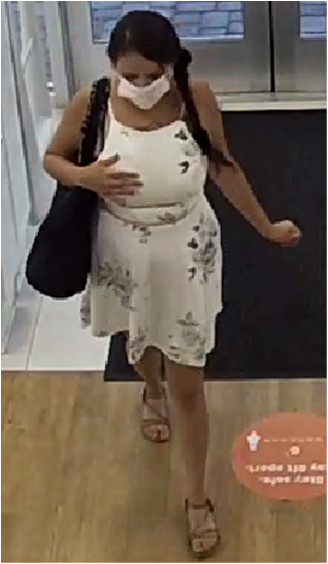 The Fort Walton Beach Police Department is trying to identify this man that burglarized a vehicle at a residence on NE Hollywood Boulevard on 07/15/2020. The victim stated that the subject rides through the neighborhood on a bicycle and is believed to live somewhere on Elm Ave. Anyone with information can contact Emerald Coast Crime Stoppers anonymously at (850) 863-TIPS, at www.emeraldcoastcrimestoppers.com or submit a tip via the P3 Tips Mobile App. 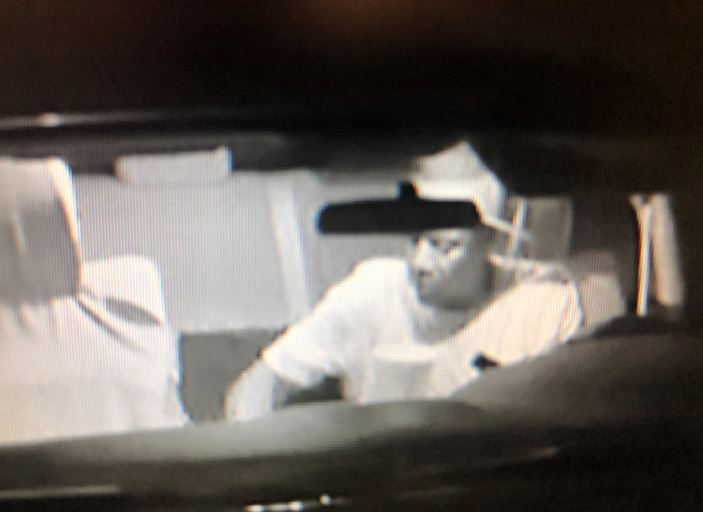 The Okaloosa County Sheriff's Office is working to identify these three individuals that used a stolen credit card at the Target in Destin on 07/12/2020. The card was stolen during a vehicle burglary at the Princess Beach access on the same date. Anyone with information about this case can contact Emerald Coast Crime Stoppers anonymously at (850) 863-TIPS, at www.emeraldcoastcrimestoppers.com or submit a tip via the P3 Tips Mobile App. 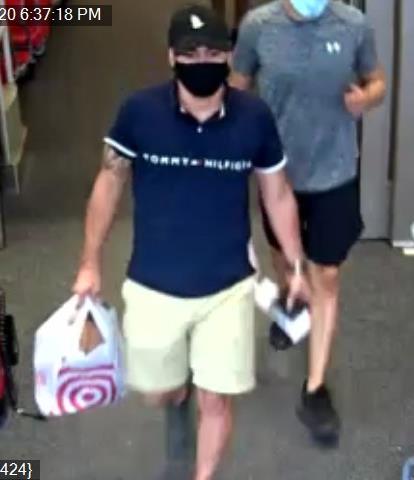 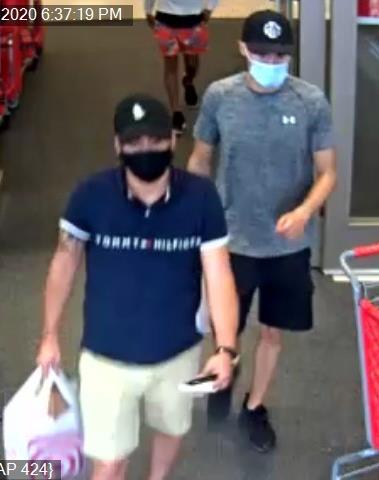 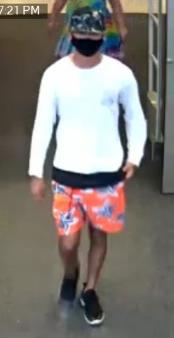 The Okaloosa County Sheriff’s Office is investigating a robbery that took place around 9:00 am on 06/09/2020 morning at the CVS located at 797 Harbor Boulevard in Destin.
The robber is described as a white male wearing a medical mask, with sunglasses and a hat pulled down.
He demanded narcotics, then left on foot.
Anyone with information please call the OCSO at 850.651.7400 or contact Emerald Coast Crime Stoppers anonymously at 850.863.TIPS, EmeraldCoastCrimeStoppers.com, or by using the P3 Tips Mobile application. 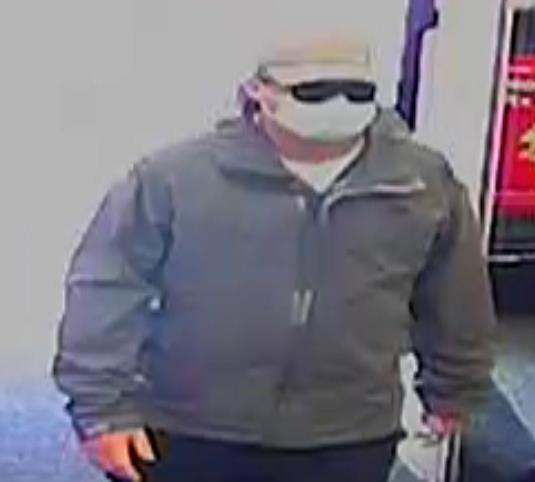 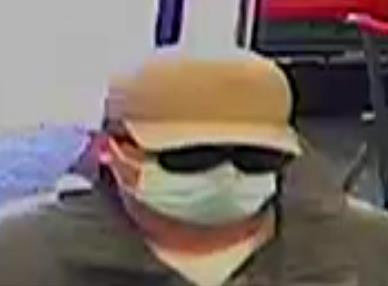 STATUS: IN CUSTODY
***UPDATE*** Suspects have been identified and arrested!
On 02/25/2020 the Walton County Sheriff’s Office responded to an armed burglary in the area of Hamon Avenue in Santa Rosa Beach. The victim was leaving his home when he realized a small window in his home was slightly open and the screen had been removed. Video captured two suspects in the house shortly before 3:00 a.m.; one white male wearing a gray hoodie and a second white male wearing a white t-shirt, a black face mask with an unidentified tattoo on his upper right arm. The suspects took miscellaneous items including two swords. Anyone with information can remain anonymous by calling Emerald Coast Crime Stoppers at (850) 863-TIPS. Submit a web tip at http://www.emeraldcoastcrimestoppers.com/ or send a mobile tip using the P3 Tips Mobile Application. 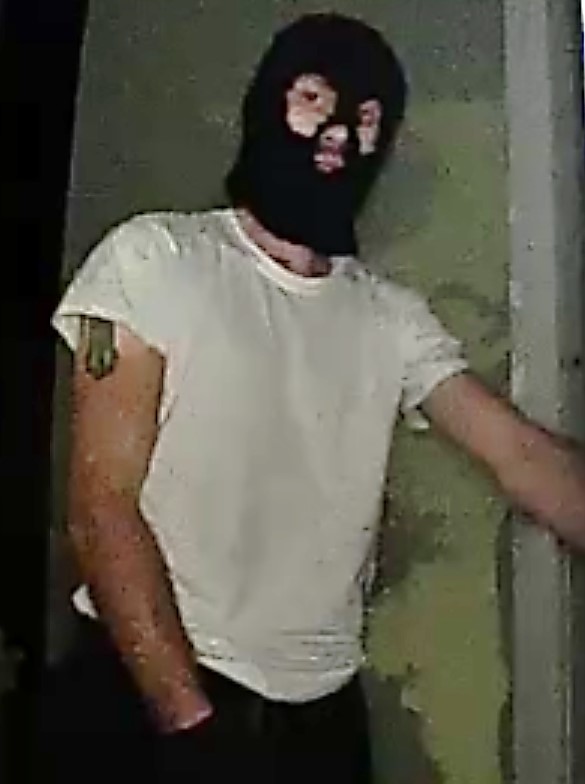 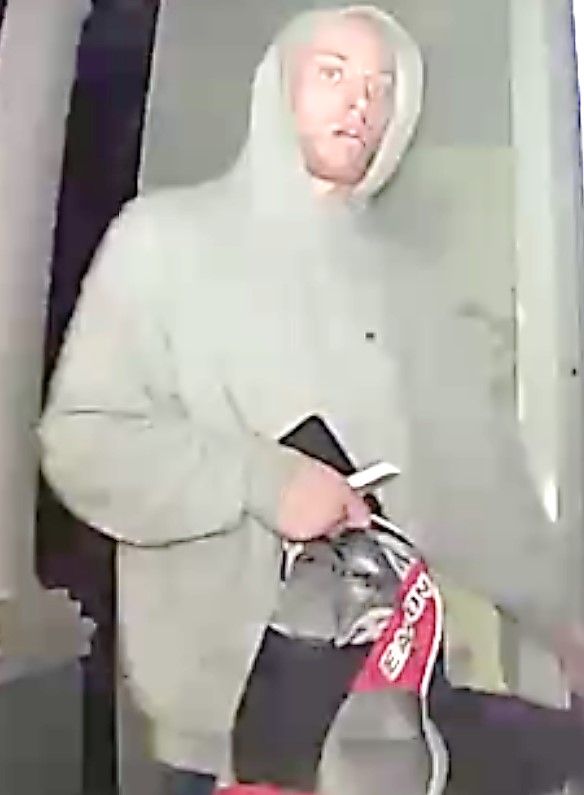